The 7th of April was another bitterly cold Spring day, hats and gloves in prime position on pegs and in bags ready to be deployed. A few brave Garganey have been reported north of the river, but it was a bird from the north itself that had me rushing for the thermals and the telescope late in the day.

I was thankful for the local Whatsapp group who were quick to report that a Grey Phalarope had been seen on Rockland Broad. This tiny Wader would have come in on the northerlies over the last few days, although to grace one of the broads is a real surprise, since most stick pretty close to the coast before moving on. Indeed, my experience of the birds has usually been on a sea watch in the Autumn, waves crashing and foam flying, my eyes straining to pick them out as they fly low just above the surf. They are fantastic birds, and now one was here on the patch. I had a brief panic when I realised my scope was in my car at the garage (thankfully I do have a much older spare) but once the home front was settled I was rapidly making headway down the track to the broad.

In spite of the cold, Swallows and my first House and Sand Martins darted overhead as I walked, no doubt wishing they had stayed on the continent for just a little longer. No birds sang. In fact, very little else was moving. This was early April, but the feeling was Baltic. On approaching the broad, some local birders were already there, as was the bird. Phew! Although distant, I watched as the bird swam back and forth, the occasional spin noted as it hunted for food. In flight, the strong white wing-bar was the stand-out feature, visible as its wings drooped and hung just above the water, not unlike a large Bat species. I soon found myself on my own watching the bird, barely even noticing the feeling in my hands disappearing faster than the light. I was prepared to put up with that for a while longer; this was one of those patch moments to savour. It has been a while since I have seen a new species on the patch, and I am not sure I will ever see a Phalarope spinning and Martins hawking over a Norfolk broad at the same time again.

Jumping forward a week, and it is ever so slightly warmer. I heard a Blackcap warble ever so briefly in the back garden today, and down the marsh a Sedge Warbler sang proudly, deservedly laying claim to the best spot as the first returning bird here. A Red Kite has come back to stake its claim on the land, a conservation success with a home for life in the village. Walking home, a clatter of Pigeon wings announced a Peregrine prospecting a meal, strength in numbers saved the day on this occasion.

As well as a moody picture of Rockland Broad, I have attached the poster advertising the AGM of the South Yare Wildlife Group. If you would like to tune in, drop me a comment here or email me jimbradley.bradleyATgmail.com (The AT is of course @, this format just avoids some Russian bot spamming me). 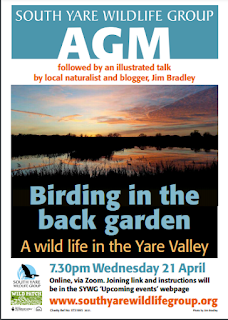 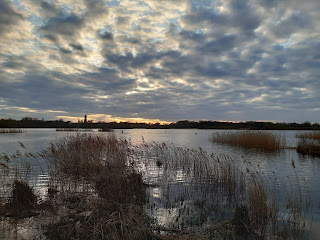 January 03, 2021
Although it was not quite the Christmas we wanted here in the valley, the rain has bought its own gift. A grim vision of the future, perhaps. But right now, the patch is peaking and is alive with birds, and for that I am thankful. On Christmas eve, it was a job to navigate away from the village due to standing water that had left abandoned cars and undelivered presents in its wake. The rain had been persistent and unforgiving, the ground, saturated. Over on the marsh, where there had once been a muddy puddle amongst the pasture, a city had sprung from the leak, with a plethora of new occupants noisily laying claim to a patch of sodden marsh. Wigeon and Black-headed Gulls in their thousands now wheeled and whistled over and amongst the newly formed pools, accompanied by smaller numbers of Teal and Shoveler. A flock of two hundred-strong Lapwing enjoyed feeding on the less damp spots where green grass was still exposed, and thrown in for good measure have been a couple of Ruff, the firs
4 comments
Read more

Reflect on a Pec, and a look at the new norm

September 16, 2020
In a year that has delivered more than its fair share of loss, grief and uncertainty, it is perhaps ironic that the period of national lockdown provided myself and closest family with both happiness and security. Like everyone, it was hard not to hold loved ones away from home, but the enforced measures meant we had more time together as a 3. We are lucky to live in the South Yare Valley, complete with garden, home to some chickens and as it turns out, 3 Hedgehogs and a lot of Moths. Many a happy day has been spent teaching my daughter how to tend to the chickens, explaining what makes a tomato happy and of course walks down the marsh. Only the other day we stumbled across an Otter, a piece of magic from a box of tricks that keeps on giving. With no choice but to stay at home, every day became an intimate look at parish life for the flora and fauna. Water Voles, dyke dipping, the garden Mole and passing Cranes- experiences I would have missed had we not all been at home. Historical rea
Post a Comment
Read more