January 01, 2019
In the time it took me to drive down the long uneven track to the enigma that is The Beauchamp Arms, the satellite Corvid roost had grown from zero to around 300 birds. A roughly even mix of Rooks and Jackdaws assemble on Claxton Marshes every evening during the Winter (currently around 15.30) and 50 minutes later a mass of circa 5000 birds have left for the giant roost at Buckenham Carrs north of the river. This was the first time I had made a clear note of timings, and was surprised by how quickly the meeting point goes from raucous to silent. In fact, an eerie quiet falls upon the avenue of trees around 16.00, and a lone cock Pheasant outcried the 1000s of Corvids perched on trees or loafing on the marshy ground beneath. What follows are a number of reshufflings as the restless birds take flight in small waves, taking a new branch to perch upon. Around 16.15, a false dawn as a splinter group takes a more purposeful flight only to loop round and return to the main group. Only at twenty minutes past does some unknown signal go out, putting all Rooks and Jackdaws to the skies. Standing on the riverbank, the black shapes move over my head, a cacophony of sound accompanying the patterns above. Were it not for the calls, the wingbeats alone would make quite a noise. Just 120 seconds later, the last bird has passed overhead; I think s/he must have had a tiring day. These few thousand join many more freshly-arrived individual pre-roost sites from across The Broads, arriving at Buckenham as darkness falls to somehow find their place in amongst the drama of roosting which loudly unfolds a couple of miles away from where I stand.

Crow Country author and Claxton resident Mark Cocker wrote of the roost briefly in The Guardian Country Diary  However, I cannot recommend the aforementioned title enough, a nice perspective on the wider goings on of the Corvid family in and around Norfolk. 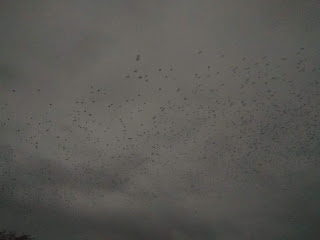 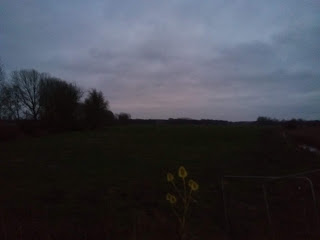