March 08, 2014
I have spent most of the morning planting summer bulbs, a Buddleia and some heather in the garden. The Snowdrops underneath the tree are perhaps past their best, but the Daffodils and Crocus that have materialised are welcome and look smashing. The mild weather has had me removing layers in the middle of the job, and the local wildlife scene appears intent and with purpose for the first time this year. Driving along Slade Lane this morning, I saw my first Butterfly of the year, a windswept Small Tortoisehell. Always a red letter moment in any calendar year. Back in the garden, 2 more Small Torts and a powerful looking male Brimstone. Added to this a large Bee species (I intend to get to know Bees much better this year) and a Ladybird species and Spring has truly sprung.
Although our feeding station is rarely utilised by the resident Tits unless early in the morning, the garden and surrounds has certainly thrown up some good birds. A reservoir to the south of us pulls in a variety of wildfowl at night, and standing in the dark I have heard Egyptian and Greylag Geese, Teal, Wigeon, Little Grebe and Mallard. Oystercatcher are heard most nights since early in the week and Black-headed Gulls are a noisy distraction. Our garden borders a large paddock, which is nicely overgrown, pleasing the Rabbits. We had a nice surprise one evening whilst washing up, since it was not just the Rabbits who enjoyed using the paddock: 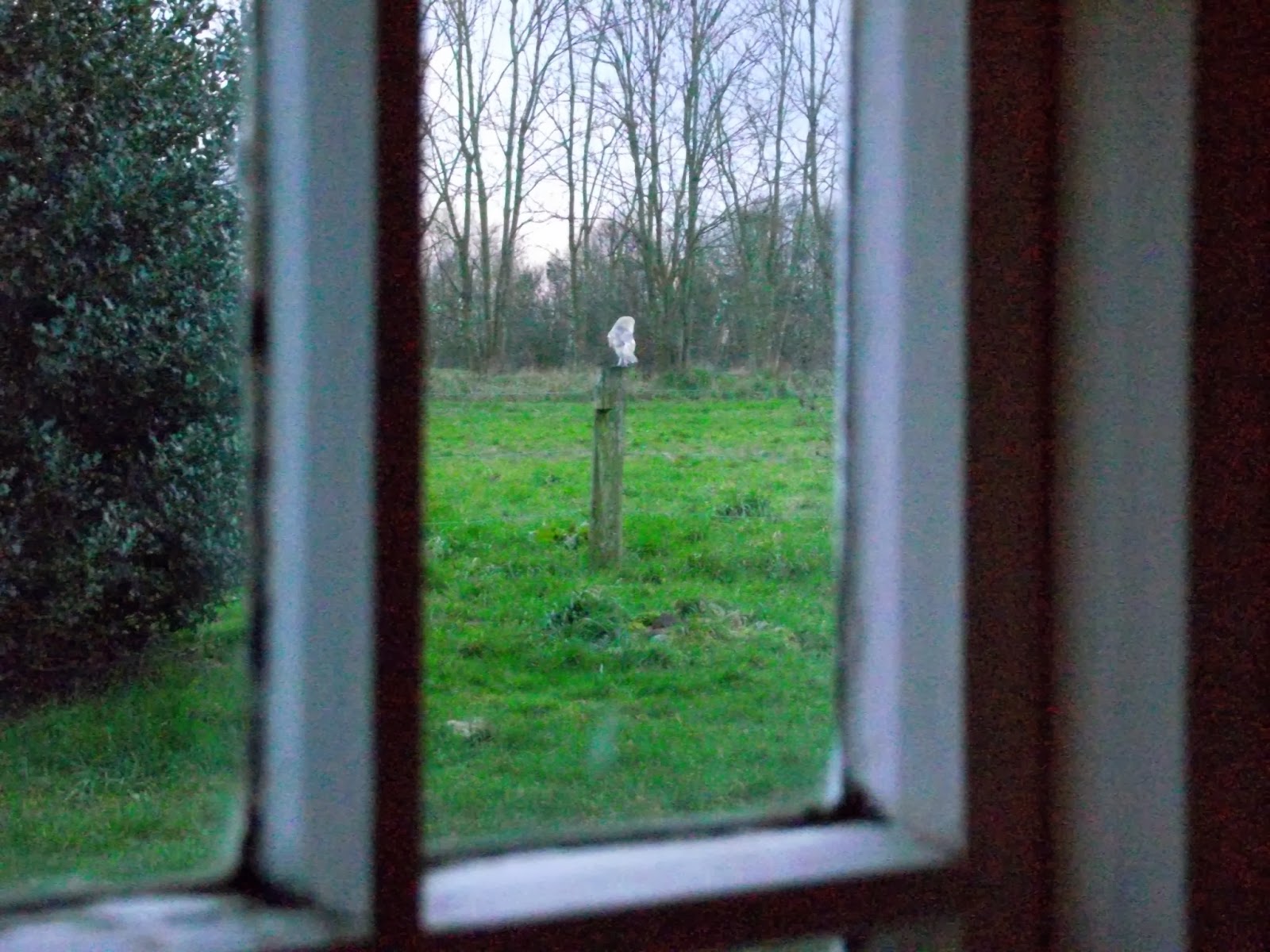 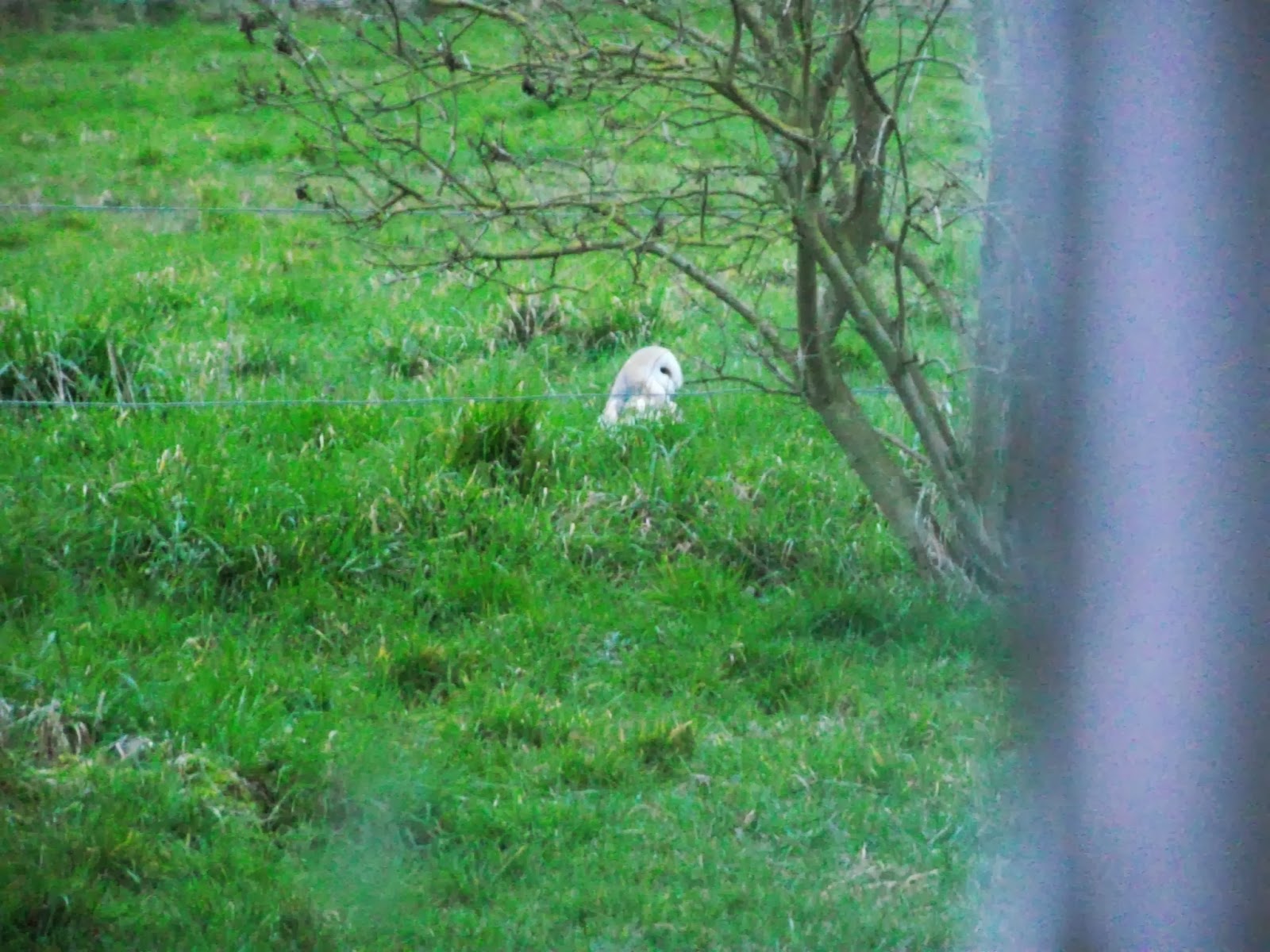 The Barn Owl epitomises everything I hoped for when we moved out here. Freedom, beauty and wild spaces. She, or he, has since been seen twice more. Hopefully a nest is nearby.
Although less exciting, Linnet are regular over the garden and probably breed in the surrounding farmland. Yellowhammer, Sparrowhawk, common Tit Species, House Sparrow and Tawny Owl have all been heard or seen in the garden.

Weekends have been spent unpacking and sorting the garden, hosting parents and paying bills so little time for proper birding. The last full visit I managed at Church Marsh was on the 20th of February with Ricky, and thankfully was the best trip of the year so far. The first Oystercatcher had returned to Wood's End and 2 Tufted Duck were on the river. Ricky picked out a Little Grebe, soon followed by a second. Not an easy bird here. Best of all was a small passerine perched on the reed stems near the gun club. I looked, and looked again to be sure. Stonechat! A patch lifer. So full of character and a bird we both hold in high esteem. I checked if he was still about on Sunday morning, but there was no sign.

I have been inspired since moving here, and knowing I can walk down to the patch tomorrow morning before breakfast is a freedom I will do my best not to take for granted.

January 01, 2019
In the time it took me to drive down the long uneven track to the enigma that is The Beauchamp Arms, the satellite Corvid roost had grown from zero to around 300 birds. A roughly even mix of Rooks and Jackdaws assemble on Claxton Marshes every evening during the Winter (currently around 15.30) and 50 minutes later a mass of circa 5000 birds have left for the giant roost at Buckenham Carrs north of the river. This was the first time I had made a clear note of timings, and was surprised by how quickly the meeting point goes from raucous to silent. In fact, an eerie quiet falls upon the avenue of trees around 16.00, and a lone cock Pheasant outcried the 1000s of Corvids perched on trees or loafing on the marshy ground beneath. What follows are a number of reshufflings as the restless birds take flight in small waves, taking a new branch to perch upon. Around 16.15, a false dawn as a splinter group takes a more purposeful flight only to loop round and return to the main group. Only at tw…
Post a Comment
Read more

Despite Spring being a leap ahead back home compared to the north, reminders of the season past were hunting  Claxton Marsh as we had discussed. The Short-eared Owls had not been present all Winter, and sightings of two birds in April were oddly my first of the year. A background orchestra of Grasshopper and Sedge Warbler was a contradiction, but here were the early birds and a couple simply not in a rush.
I have been taking part in the Common Bird Cen…
Post a Comment
Read more

Thoughts on The Brecks and a moment of magic

February 23, 2019
With the onset of an early Spring, naturally The Brecks have been receiving plenty of attention from visiting birders, and I was fortunate enough to spend some time at well known sites and some off the beaten track with mum, last week. We enjoyed wonderful views of Hawfinch feeding on the ground at Lynford, frustrating glimpses of an agile Firecrest in the carpark and singing Woodlark amongst tens of Brambling and Siskin. This was all in a couple of hours, a delayed start due to mum parking at Lynford Hall. Both of us sat in our cars half a mile apart wondering where the other was. Cue missed calls from mum and dad (the big gun rolled out) when I retreated to Mundford to gather reception and find the missing parent. Whilst waiting, I even managed to squeeze in listening to Jupiter from the Planet Suite, which provided a great backdrop in Lynford carpark as I watched Lee Evans and co return to their cars victorious.

That sighting allows a neat segue-way into my key point. The Brecks is…
3 comments
Read more