August 08, 2019
The marshes of Suffolk and Norfolk are steeped in heritage and history, where folk come and go, leaving behind stories and markers on the landscape. The smock mill at Herringfleet is one such example, its name derived from its likeness to smocks worn by farmers in days gone by. Today the mills are not in use but instead provide a way-marker for visitors and walkers. As was so on a breezy Wednesday, the mill being the target for a there-and-back walk that took in the small natural scrapes that had opened up on the marshes thanks to sympathetic land management.

A pair of Greenshank, piping and barrel-rolling, alighted one scrape and fed on a secluded muddy bank out of our gaze. At least 2 scaly-looking juvenile Wood Sandpiper were less bothered by our presence on the bank and represent a drop in the ocean regarding the recent invasion of this species on migration. Not to be cast into the margins, Green Sandpiper were omnipresent throughout the amble and without these visitors, some may argue the Wood wouldn't seem quite so special. But that's not really fair, and a view I try to avoid. I find that with birds, we compare when perhaps we shouldn't. We apparently 'need' the blackbirds so that when a Ring Ouzel does pass through, we elevate it purely for rarity value. Today, with big skies and time on our side, it was a pleasure to consider the individual worth of each species and watch them go about their business.

A search online of the origin of the name Herringfleet provides no clues, but for me it is evocative of boats working the water ways, heading out to sea for a catch before returning to Somerleyton. In the early hours they would have been guided by lanterns on board, or on some nights the ghost lights of will-o-the-wisp adorning the marsh, what we would explain today as bioluminescence. Somerleyton hall itself has a resident ghost, frequenting the long corridors and cellar, hinting at past dynasties. These stories stand the test of time, somehow suited to the open skies and feeling of isolation out here. Even the rattle and clank of the train does not detract from the moment, for the swirl of the reeds and the grumbling of a Reed Warbler seem amplified in these surrounds. Red Admiral Butterflies glide past, lured by the Hemp Agrimony on show. As it always was, the landscape clinging on to what is worth keeping in an age of flux. 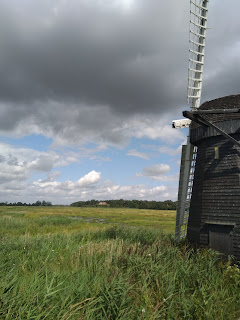