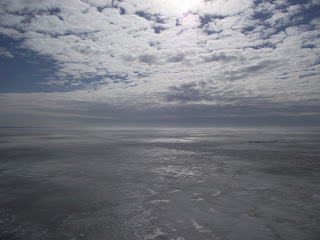 Ice at the ferry crossing 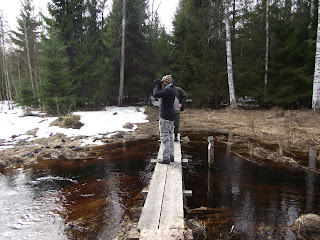 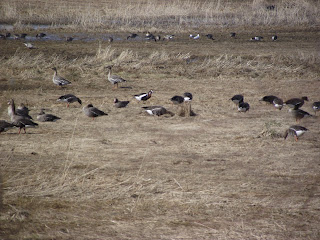 Pick the bones out of that! 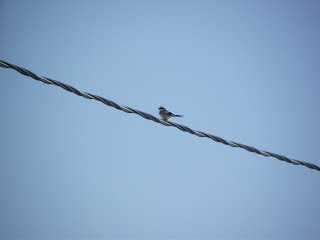 Introduction.
Estonia is a place of real wilderness, yet easy to explore with the possibility of some cracking birds. Recent literature from both Gerard Gorman and Dave Gosney means that there is now plenty of useful information on birding Estonia, yet this country remains relatively unknown compared to other eastern European states such as Poland, Hungary and the Czech Republic. Steller’s Eider, Owls and Woodpeckers in early Spring, Citrine Wagtail, Great Snipe, Great Spotted Eagle, Black Stork and Greenish Warbler in May and beyond are just some of the birds you may encounter.

We used Estonian Nature Tours http://www.naturetours.ee/ to help plan and guide our trip. We are a young couple, so did not fancy being part of a tour bus scenario, and were keen to do most of the birding ourselves. We used a guide for one and a half days courtesy of the above company, who in turn arranged a hire car and our accommodation. In hindsight, we could probably have made arrangements independently, but this gave us piece of mind and both guides were very good. Estonian Nature Tours were excellent when it came to planning the trip and organising potential places to stay and birding sites to visit.
Books and DVDs:
'Birding in Eastern Europe' Gerard Gorman
'Finding Birds in Estonia' Dave Gosney. This is a book and DVD pack, both of which are excellent and highly recommended. We used this guide every day without fail.
Logistics.
Flights.
Easyjet fly from Stansted to Tallin, and we booked our tickets January 2011 for around £120 for the pair.
Car Hire.
Estonian Nature Tours organised a Honda Jazz for us at 215 Euros for 6 days. Main roads are tarred and usually free of traffic. Minor roads are what we in the UK would class as a dirt track and need to be driven with some caution. Small settlements and cities are well signposted, and the maximum drive time between large cities was around 2 hours; Estonia is a small country and easy to navigate. However, driving in Tallin is another matter. Signposting is sudden and lanes open and close without one realising.
Petrol is around half the price of what we pay in the U.K (£1.35/LITRE) and stations are common, as are ATM’s. Some stations are self service where you pop in your card before starting, and some are pay at the counter.
We bought a michelin road map from ebay before the trip for around a fiver, and this turned out to be a shrewd purchase in hindsight.
Guided Birding.
Looking back, I am glad we had paid for the guides but that is not to say you have to use a guide to bird in Estonia. We used one guide on the island of Saaremaa from 15.00 to 22.00 in order to secure Steller’s Eider and hopefully some Owls. We used another near Tartu from 06.00 to 18.00 for the forest brding, chiefly in search of woodpeckers. Their local knowledge and expertise was a real help and we enjoyed their company.
Food and Drink.
It would be difficult to be a vegetarian in Estonia. We ate plenty of meat here, even for Breakfast! The various places we stayed at provided a substantial breakfast, often enough to see us through until dinner. This consisted of porridge, cold cuts, cheese, cucumber, tomatoes, eggs, bacon, bread and juice. Main meals we ate included pork and beef dishes, chicken and fish. Nothing out of the ordinary as far as we were concerned, and we were well looked after. We both agreed we never ate a bad meal, and some were very good. They like their soup, too. Food was between a third and a half cheaper than what we are used to in the UK, depending on where we ate.